Star Search For A Cause - Charity CD Launch

This was my 6th year involved in the production!  ​The show was aired on Channel 7 in December.

The Deputy Mayor of Casey, Wayne Smith, invited me to perform at the La Faya Festival held on Sunday 22nd April.  It was amazing to be a part of the event at Bunjil Place, having the biggest crowd to date!  The atmosphere was great.
​

I was selected as a finalist for Casey's Got Talent, which was held on Friday 20th April at Bunjil Place in Narre Warren.  Proceeds were donated to the ACE Foundation - a non profit organisation supporting local students requiring assistance with cultural, language, socioeconomic, physical or family fracture related challenges.

My dance troupe performed at the Berwick show again this year and I was also asked to be a solo vocalist.  It was a great day.

This was my 5th year as a cast member of the VSSS.  I was cast as an ensemble vocalist for the 2017 shows.  I love this production.  It just gets better each year!

I was lucky enough to student teach during 2 classes each week this year. I love student teaching little kids.
​

City of Casey's Star Search For A Cause 2017

I was lucky enough to be chosen as a heat performer for this year's competition, but I had to decline due to other performance commitments. There's always next year :-)

I am so excited to have been offered a scholarship with Cecchetti Ballet Victoria for 2016.  There were approx. 160 auditionees from Grades 4, 5 & 6. This is a great opportunity and I enjoyed training with industry professionals this year.

I was cast as an ensemble vocalist and dancer for the second year in a row.   This was my 4th year involved in "spec". ​This year's shows were held at Hisense arena on Saturday 10th September.

City of Casey's Star Search For A Cause 2016

I made the finals which was held at Westfield Fountain Gate on Sunday 24th July and I was the 2nd runner up. All money raised from this competition was for the Cancer Council.

I attended the Cecchetti Awards Day to receive a certificate and a small bag of freebies from Bloch.

I am proud to have received 100% in my Grade 4 ballet exam in 2015.  Because of this I was invited to attend an Excellence Awards Class.

In October 2015 I attended the first Head Start Dance Camp and was able to be involved in their promo video.

I was so excited to have been a member of the ensemble dance cast and a featured vocalist for the Victorian State Schools Spectacular 2015.  The two shows were at Hisense Arena on Saturday 12th September and was broadcast on Channel 7 on December 5th. This was my 3rd year involved with the spectacular production, but it was my first year of ensemble dance and vocals.

I was selected to be a model for a photographic entry as part of the international photo fringe programme at Ballarat.  My photographer was Bronwyn Hutton & she chose me to portray a young Elizabeth Taylor as Cleopatra.The festival ran from 22nd Aug to 20th Sept.

With approximately 70 entrants, there are 10 awards handed out to ballet dancers and I was so happy to have received an honourable mention.

I was cast as the lead female role for this short film, which was made by 6 second year Deakin University Students. Please go to the gallery to watch the film.

A selection of elite troupes performed at the Berwick Show again this year.

A selection of performers helped bring a fun atmosphere to the opening of the new Cranbourne Park Shopping Centre.
​I was a soloist and sang "Smile" for the shoppers.

On May 4th 2014 I attended this event and won!  I am the first girl from my dance school to win this award.
A big THANK YOU to my teachers who have helped me learn so much.

I was lucky enough to be chosen as one of the featured dancers to be filmed in the new ATOD jazz training syllabus DVD.
It was a really great experience to work with Paul Malek.  The videos are to be sold to dance teachers Australia-wide for the guidance of ATOD jazz techniques.

This was my second year in the VSSS Choir.  This is such a fun experience and it's great to meet up with some friends from different schools.  This year's "spec" was performed live at Hisense Arena in Melbourne on 13th September and was aired on Channel 7 on 19th October.

A selection of elite troupes performed at the Berwick Show on Saturday Feb 22nd. This is always a fun day.

I loved being involved in the Victorian State School Spectacular this year.  My brother Brandon was a principal dance cast member and I sang in the Spec choir.

I am one of the faces of Mission Foods Australia's national TVC for their resealable wraps packs.
See the gallery page to watch the commercial.

A selection of elite troupes performed at the Berwick Show on Saturday Feb 23rd.  It was such a hot day but we had a great audience.

My brother, Brandon, and I were backup dancers for Frank Dixon's performance of "Toorak Girl" on Kids WB (channel 99 - on Sunday 24th February 2013) 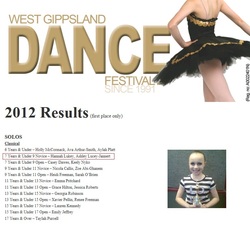 How exciting.... my first Ballet trophy from the West Gippsland Dance Festival.
It was very funny when I was competing because I saw my parents in the crowd..... and my dad was crying!  I love my mum & dad to bits.

I am a featured girl in Dana Stockton's film Lucy's Bedtime.  This was to be a short film to be released early 2013, but Dana has decided to turn it into a FEATURE!
​Dana  is the Director / Writer / Producer of this feature film, who has also won awards for his short films like "In Unexpected Places", "Shorti", "Fable of the Fairytales"  and "Toby and the Runaway Kite". 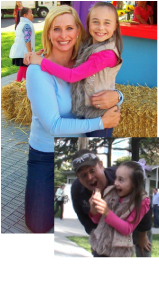 It was great to be a part of the cubby house challenge at the Melbourne Floral Exhibition ..........

Even if Jason Hodges did try to steal my brownie! 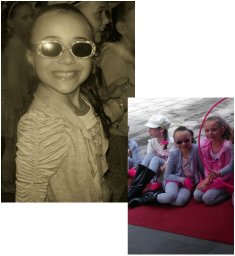 We were a little nervous waiting on the red carpet to bust into the Mattel Corporate conference for Barbie's Birthday.  But our mini flash mob was an absolute hit!
Powered by